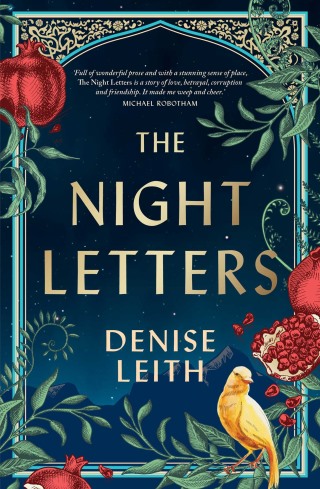 Yet when threatening night letters from the Taliban taunt the town, and young boys disappear from Jamal Mina, Kabul’s largest slum, Sofia can no longer remain silent. While the square is encased by fear, an elegant former warlord proves an unlikely ally, and a former lover re-emerges with a warning. As the search for the boys intensifies, and Sofia feels herself being drawn back into a love affair she thought had ended, it soon becomes clear that answers will bring a heavy price.

Gripping and evocative, The Night Letters takes you to the heart of Kabul in a story of secrets, friendship and love in all its imperfect guises.

‘Full of wonderful prose and with a stunning sense of place, The Night Letters is a story of love, betrayal, corruption and friendship. It made me weep and cheer.’ – Michael Robotham, author of When She Was Good

‘A bittersweet and astonishingly detailed narration of both the simplicity and complexity of life in Afghanistan. What I loved about the book is that it does not represent Afghan women as passive and docile, but you will learn about their stories of bravery, struggles, and persistence.’ ­– Aalam Gul Farhad

Denise Leith:
Denise Leith is a Sydney author, and former lecturer of International Relations, and Middle East politics at Macquarie University. Her debut novel, What Remains (Allen & Unwin, 2012) was shortlisted for the Asher Award and the Fellowship of Australian Writers National Literary Awards - Christina Stead Award. She has also published two non-fiction works, The Politics of Power (University of Hawaii Press, 2002), and Bearing Witness: the Lives of War Correspondents and Photojournalists (Random House Australia, 2004). Denise’s work has involved extensive travel, including time in an AIDS hospital in South Africa, in a refugee camp in the Middle East and in an isolated village in the mountains of West Papua. Denise has spent a number of years mentoring Afghan women in fiction and non-fiction. She currently resides on the Northern beaches of Sydney.