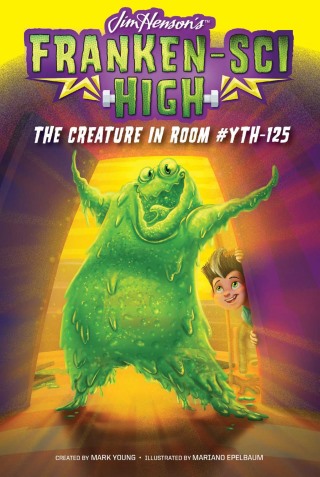 The science at Franken-Sci High gets even madder in this fifth book in a wacky series created with the Jim Henson Company.

There’s a school field trip coming up, and most Franken-Sci High students can’t wait to venture off the school campus. But Newton Warp’s roommate, H.G. “Higgy” Vollington, only wants to go if he can find a way to look human. Higgy usually flaunts the green goo he is made of, but when he lived out in the real world, regular people always stared at him. Newton, Shelly, and Theremin try various ways of making him less green, but nothing works. They need to go to the enemy for help: Mimi Crowninshield is a genius when it comes to inventing creepily-realistic cosmetics. She agrees to help Higgy if the friends tell her Newton’s big secret. Newton doesn’t know the answer to the mystery of where he came from, but now he has more reason than ever to figure it out!

Mark Young: In the “real” world Mark Young makes a living as a multiple Emmy winner who has written and produced the animated TV shows for Netflix, Disney, Nick Jr., ABC, CBS, and NBC. However, in his “inner” world, Mark believes that Franken-Sci High isn’t actually his creation but a real school where budding mad scientists learn how to create synthetic eyeballs, travel to different dimensions, try gravity gum, and design inflatable pets. Mark lives in Southern California with his wife. Between them, they have four amazing kids. More about Mark at MarkYoung.co.