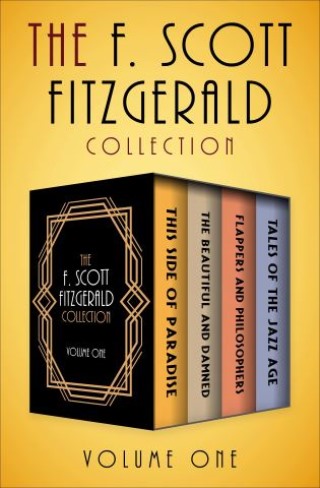 This Side of Paradise, The Beautiful and Damned, Flappers and Philosophers, and Tales of the Jazz Age

Four unforgettable works by the author of The Great Gatsby—one of the greatest writers of America’s Lost Generation.

This Side of Paradise: Amory Blain experiences a childhood of worldly sophistication before a medical condition forces him to face reality. From prep school and Princeton University to the horrors of World War I, Blaine searches for his place in the world—a quest that personifies the struggles of his generation.

The Beautiful and the Damned: The presumptive heir to an enormous fortune, Anthony Patch is a bon vivant of New York society. He and his wife, Gloria, live a life of extravagant pleasure until Anthony’s inheritance disappears and the Great War breaks out, sending their glittering marriage on a disastrous downward spiral.

Flappers and Philosophers: This collection of short stories includes the Jazz Age classic “Bernice Bobs Her Hair,” in which an awkward young woman is transformed into a popular beauty by her jealous cousin. Other gems include “The Ice Palace,” “The Cut-Glass Bowl,” and “The Offshore Pirate.”

Tales of the Jazz Age: This short story collection includes “The Curious Case of Benjamin Button,” the classic tale of a man who ages backwards, as well as “May Day,” “The Diamond as Big as the Ritz,” and many others.

F. Scott Fitzgerald: F. Scott Fitzgerald (1896–1940) was born in St. Paul, Minnesota and attended Princeton University. His debut novel, This Side of Paradise—published when he was twenty-three years old—was an immediate success, selling out of its first printing in three days. He would go on to write some of the finest short stories and novels of the twentieth century, including The Beautiful and Damned, Tender Is the Night, and The Great Gatsby, and he became an icon of the Jazz Age—a term he coined.