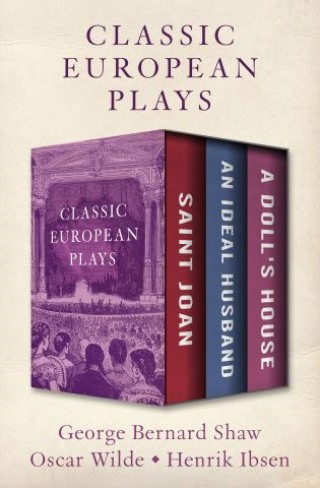 Saint Joan, An Ideal Husband, and A Doll's House

These three timeless plays showcase the sparkling wit and provocative intellect of some of modern drama’s greatest playwrights.

Saint Joan by George Bernard Shaw: This complex drama depicts the life of Joan of Arc—from her childhood vision calling her to lead the French army against the English in the Hundred Years War through her eventual capture, trial, and burning at the stake. An epilogue depicts a retrial that clears Joan of heresy, declaring her a Christian martyr.

An Ideal Husband by Oscar Wilde: In this timeless drawing room comedy, a blackmail scheme forces a married couple to reexamine their moral standards—providing a wry commentary on the hypocrisy of politicians. Carried along by nonstop witty repartee, this is satirical theater at its finest.

A Doll’s House by Henrik Ibsen: This quintessential work of dramatic realism depicts one woman’s struggle against patriarchal society. The central character’s rejection of a smothering marriage shocked theatergoers of the late nineteenth century while the play’s pioneering style set the stage for twentieth century domestic drama.

George Bernard Shaw:
Acclaimed Irish playwright and Nobel laureate Bernard Shaw has left an indelible mark on Western theater, culture, and politics. Over the course of his life, he wrote more than 60 plays that addressed prevailing social problems through comedy. Shaw was also a prolific essayist and lecturer on politics, economics, and sociological subjects, and was eventually awarded the Nobel Prize in Literature for his work that is marked by its use of stunning satire to encapsulate humanity.
|||
Oscar Wilde (1854–1900) was an Irish playwright, novelist, essayist, and poet. Celebrated on both sides of the Atlantic for his wit, he is rumored to have informed a customs agent upon his arrival in America, “I have nothing to declare but my genius.” Wilde’s health and reputation were destroyed by his imprisonment for “gross indecency” in 1895, and he died in poverty a few years after his release. Today, his only novel, The Picture of Dorian Gray, and his play, The Importance of Being Earnest, are recognized as masterpieces of English literature.
|||
Henrik Ibsen (1828–1906) is the Norwegian playwright deemed the “father of realism.” Born in Skien, Norway, Ibsen was exiled in 1862 to Italy, where he wrote the tragedy Brand. After moving to Germany in 1868, he wrote A Doll’s House (1879), one of his most famous works; Hedda Gabler (1890), the title character of which is one of theater’s most notorious roles; and many other plays. In 1891, Ibsen returned to Norway, where he remained until his death.