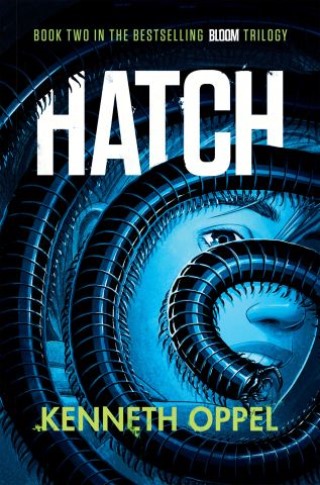 The second title in Kenneth Oppel’s explosive science-fiction trilogy, described by the Wall Street Journal as “so exciting that the pages might well have been printed with adrenaline”

First the rain brought seeds. Seeds that grew into alien plants that burrowed and strangled and fed.

Seth, Anaya and Petra are strangely immune to the plants’ toxins and have found a way to combat them. But just as they achieve their first success, the rain begins again. This rain brings eggs. Which hatch into insects. Not small insects. Bird-sized mosquitos that carry disease. Borer worms that can eat through the foundation of a house. Boat-sized water striders that carry away their prey.

Our heroes aren’t able to help this time--they’ve been locked away in a government lab with other kids who are also immune. What is their secret? Could they be . . . part alien themselves? Whose side are they on?

Kenneth Oppel expertly escalates the threats and ratchets up the tension in this can’t-read-it-fast-enough adventure with an alien twist. Readers will be gasping for the next book as soon as they turn the last page . . .

KENNETH OPPEL is the author of numerous books for young readers. His award-winning Silverwing trilogy has sold over a million copies worldwide and was adapted into an animated TV series and a stage play. Airborn won a Michael L. Printz Honor Book Award and the Governor General’s Literary Award; its sequel, Skybreaker, was a New York Times bestseller that was named Children’s Novel of the Year by The Times (London). His other books include Half Brother, This Dark Endeavor, Such Wicked Intent, The Boundless, The Nest and Every Hidden Thing. Born on Vancouver Island, Kenneth Oppel has lived in Nova Scotia and Newfoundland, as well as England and Ireland. He now resides in Toronto with his wife and children.