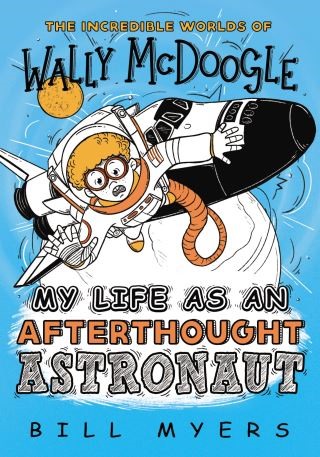 My Life as an Afterthought Astronaut

Classic stories from the Wally McDoogle series now with new designs and spot illustrations throughout.

"Just 'cause I didn't follow the rules doesn't make it my fault that the Space Shuttle almost crashed. Well, okay, maybe it was sort of my fault. But not the part when Pilot O'Brien was spacewalking and I accidentally knocked him halfway to Jupiter, or when I wound up in a space suit and nearly became the first human satellite to orbit the Earth; you can't blame that on me.

"Well, okay, maybe that was sort of my fault, too."

So begins another hilarious Wally McDoogle MISadventure as our boy blunder stows aboard the Space Shuttle and learns the importance of: OBEYING THE RULES!

Bill Myers (www.Billmyers.com) is a bestselling author and award-winning writer/director whose work has won sixty national and international awards. His books and videos have sold eight million copies and include The Seeing, Eli, The Voice, My Life as, Forbidden Doors, and McGee and Me.