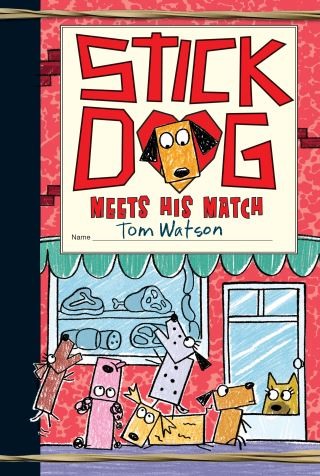 Well, not before Stick Dog’s day spins out of control first. As he and his friends work to rescue a hyper Karen from a really deep hole, Poo-Poo catches a scent. It’s meat! Marvelous meat! And it’s in a big truck. But there’s more than meat in that truck. There’s also a new dog. And when Stick Dog sees her, his heart feels funny.

Stick Dog needs to rescue Karen and track down that meat truck. It will take all Stick Dog’s smarts, problem-solving skills, and patience to save his friend—and feed his gang. But he just might need some help this time…

It’s another tail-wagging, food-craving adventure for these hilarious hungry hounds. Throw in some puppy love (!) and this Stick Dog adventure is unlike any ever before.

Other favorites in the series include Stick Dog Wants a Hot Dog, Stick Dog Chases a Pizza, and many more!

Tom Watson lives in Chicago with his wife, daughter, and son. He also has a dog, as you could probably guess. The dog is a Labrador-Newfoundland mix. Tom says he looks like a Labrador with a bad perm. He wanted to name the dog "Put Your Shirt On" (please don't ask why), but he was outvoted by his family. The dog's name is Shadow. Early in his career Tom worked in politics, including a stint as the chief speechwriter for the governor of Ohio. This experience helped him develop the unique, storytelling narrative style of the Stick Dog books. More important, Tom's time in politics made him realize a very important thing: Kids are way smarter than adults. And it's a lot more fun and rewarding to write stories for them than to write speeches for grown-ups.