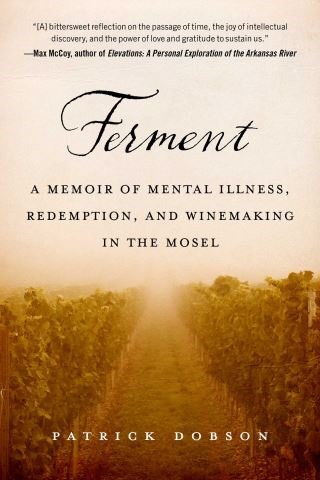 A Memoir of Mental Illness, Redemption, and Winemaking in the Mosel

A deeply moving account of one man’s return to the German town where he first pursued a career in winemaking, and his attempt to reckon with the mental illness, alcoholism, and enduring relationships that defined the most formative chapter of his life.

After an attempted suicide by hanging—with his son in the next room—author Patrick Dobson checks into a mental hospital, clueless, reeling from bone-crushing depression and tortuous, racing thoughts. A long overdue diagnosis of manic depression offers relief but brings his confused and eventful past into question.

To make sense of his suicide attempt and deal with his past, he returns to Germany where, three decades earlier, he arrived as twenty-two-year-old—lost, drunk, and in the throes of untreated mental illness—in search of a new life and with dreams of becoming a winemaker. The sublime Mosel vineyards and the ancient city of Trier changed his life forever.

Ferment charts his days in Trier’s vineyards and cellars, and the enduring friendships that would define his life. A winemaker and his wife become like parents to him. In their son, he finds a brother, whose death years later sends Dobson into a suicidal tailspin. His friends, once apprentices like himself, become leaders in their fields: an art historian and church-restoration expert, an art- and architectural-glass craftsman, a painter and photographer, and a theologian/journalist. The relationships he builds with them become hallmarks of a life well-lived.

Patrick Dobson: Patrick Dobson is an essayist, poet, historian, author, and ironworker. His first book, Seldom Seen, chronicled a 1,200-mile walk from Kansas City to Helena, Montana and his second, Canoeing the Great Plains, detailed his journey home by canoe down the length of the Missouri River.He lives in Kansas City, Missouri.