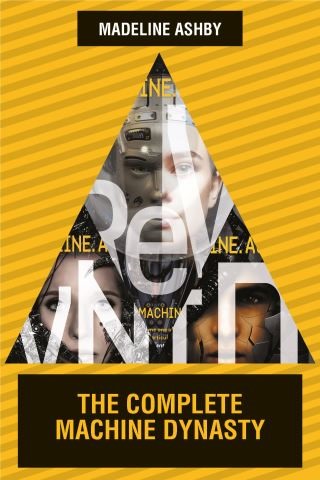 vN
Amy Peterson is a von Neumann machine, a self-replicating humanoid robot. For the past five years, she has been grown slowly as part of a mixed organic/synthetic family. She knows very little about her android mother’s past, so when her grandmother arrives and attacks her mother, little Amy wastes no time: she eats her alive.

Now she carries her malfunctioning granny as a partition on her memory drive, and she’s learning impossible things about her clade’s history – like the fact that the failsafe that stops all robots from harming humans has failed… Which means that everyone wants a piece of her, some to use her as a weapon, others to destroy her.

iD
Javier is a self-replicating humanoid on a journey of redemption. Javier's quest takes him from Amy's island, where his actions have devastating consequences for his friend, toward Mecha where he will find either salvation... or death.

ReV
The Rapture, which vN were engineered for, finally comes to pass. Now that the failsafe that once kept vN from harming humans has been hacked, all are discovering the promise – and the peril – of free will.

With her consciousness unleashed across computer systems all across the world, the vicious vN Portia stands poised to finally achieve her lifelong dream of bringing humanity to its knees. The old battle between her and her granddaughter Amy comes to an epic conclusion in the war for the very systems that keeps the planet running. Can Amy get her family to the stars before Portia destroys every opportunity for escape and freedom?

Madeline Ashby: MADELINE ASHBY is a science fiction writer and strategic foresight consultant living in Toronto. Her short fiction has appeared in Nature, FLURB, Tesseracts, Imaginarium, and Escape Pod. Her other essays and criticism have appeared at BoingBoing, io9, WorldChanging, Creators Project, Arcfinity, and Tor.com.