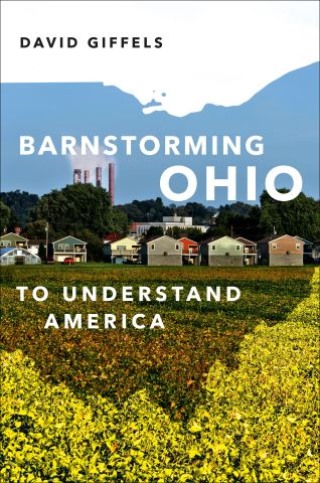 An on-the-ground look at the diverse challenges facing Ohio, in light of its national significance as the state that has aligned with presidential election winners more than any other -- from an award-winning author and essayist dubbed "the Bard of Akron" (New York Times).
The question of America's identity has rarely been more urgent than now, and no American place has ever been more reflective of that identity than Ohio. David Giffels, a lifelong resident of the "bellwether" state, has spent a quarter century writing and thinking about what it means to live in what he calls "an all-American buffet, an uncannily complete everyplace." With Cleveland as the end of the North, Cincinnati as the beginning of the South, Youngstown as the end of the East, and Hicksville (yes, Hicksville) as the beginning of the Midwest, Ohio offers important insight into the state of the nation.
As a historic 2020 presidential election approaches, Barnstorming Ohio is Giffels' account of a year on Ohio's roads, visiting people and places that offer valuable reflections of the national questions and concerns, as well as astounding electoral clairvoyance -- since 1896, Ohio has accurately chosen the winner in twenty-nine of thirty-one presidential elections, more than any other state.
With lyricism and a native's keen eye, Barnstorming Ohio takes readers into the living room of a man whose life was upended just shy of retirement by General Motors' shutdown of its Lordstown assembly plant. It offers an exclusive view into the presidential campaign of Ohio Democratic hopeful Tim Ryan. It takes us into the sodden soybean fields of farmers struggling to outlast the dual punch of a protracted trade war and historic rainfall, and to an indie rock music festival in Dayton a week after a mass shooting there. We enter the otherworld of long-dormant shopping malls as Amazon transforms them into vast new fulfillment centers. On the lighter side, Giffels makes a "beer run" into Ohio's booming craft brewing industry and revisits the legend (and the bird-nest toupee) of Jim Traficant, a larger-than-life Ohio politician whom many have called the "proto-Trump."
In a year when Americans are seeking answers, Barnstorming Ohio offers rare and carefully nuanced access to the people who have always held them.

David Giffels:
David Giffels is the author of five books, and two-time winner of the Ohioana Book Award. His critically acclaimed memoir, Furnishing Eternity: A Father, a Son, a Coffin, and a Measure of Life, was hailed by the New York Times Book Review as "tender, witty and . . . painstakingly and subtly wrought," and picked as a New York Times Book ReviewEditors' Choice. His previous books include The Hard Way on Purpose: Essays and Dispatches from the Rust Belt, also a New York Times Book Review Editors' Choice, and nominee for the PEN/Diamonstein-Spielvogel Award for the Art of the Essay, and the memoir All the Way Home (William Morrow/HarperCollins).
Giffels is the coauthor, with Jade Dellinger, of the rock biography Are We Not Men? We Are Devo! and, with Steve Love, Wheels of Fortune: The Story of Rubber in Akron. A former columnist for the Akron Beacon Journal, Giffels's writing has appeared in the New York Times Magazine,the Atlantic, Parade, the Iowa Review, the Wall Street Journal, Esquire, Grantland, and many other publications. He also was a writer for the MTV series Beavis and Butt-Head. He is a professor of English at the University of Akron, where he teaches creative nonfiction in the Northeast Ohio Master of Fine Arts program.