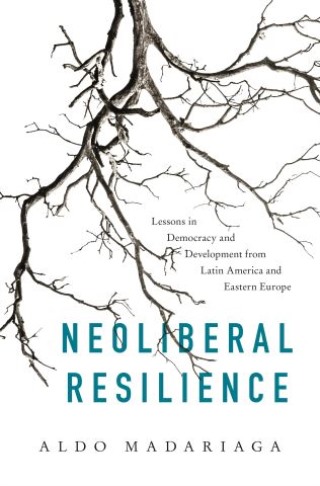 Lessons in Democracy and Development from Latin America and Eastern Europe

Since the 1980s, neoliberalism has withstood repeated economic shocks and financial crises to become the hegemonic economic policy worldwide. Why has neoliberalism remained so resilient? What is the relationship between this resiliency and the backsliding of Western democracy? Can democracy survive an increasingly authoritarian neoliberal capitalism? Neoliberal Resilience answers these questions by bringing the developing world’s recent history to the forefront of our thinking about democratic capitalism’s future.

Looking at four decades of change in four countries once considered to be leading examples of effective neoliberal policy in Latin America and Eastern Europe—Argentina, Chile, Estonia, and Poland—Aldo Madariaga examines the domestic actors and institutions responsible for defending neoliberalism. Delving into neoliberalism’s political power, Madariaga demonstrates that it is strongest in countries where traditional democratic principles have been slowly and purposefully weakened. He identifies three mechanisms through which coalitions of political, institutional, and financial forces have propagated neoliberalism’s success: the privatization of state companies to create a supporting business class, the use of political institutions to block the representation of alternatives in congress, and the constitutionalization of key economic policies to shield them from partisan influence. Madariaga reflects on today’s most pressing issues, including the influence of increasing austerity measures and the rise of populism.

A comparative exploration of political economics at the peripheries of global capitalism, Neoliberal Resilience investigates the tensions between neoliberalism’s longevity and democracy’s gradual decline.