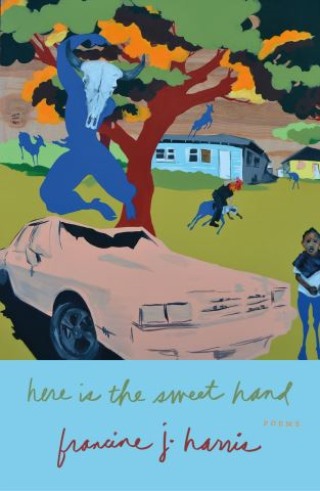 Here is the Sweet Hand

The poems in Here is the Sweet Hand explore solitude as a way of seeing. In particular, the speakers in francine j. harris’ third collection explore the mystique, and myth, of female loneliness as it relates to blackness, aging, landscape and artistic tradition.

The speakers in these poems are often protagonists. Against the backdrop of numerous American cities and towns, and in a time of political uncertainty, they are heroines in their quest to find logic through their own sense of the world.

The poems here are interested in the power of observation. But if there is authority in the individual versus the collective, Here is the Sweet Hand also poses questions about the source of that power, or where it may lead.

As in her acclaimed previous collections, harris’ skillful use of imagery and experimentation with the boundaries of language set the stage for unorthodox election commemoration, subway panic, zoomorphism, and linguistic battlefields. From poems in dialogue with the artistry of Toni Morrison and Charles Burnett to poems that wrestle with the moods of Frank Stanford and Ty Dolla $ign, the speakers in this book signal a turn at once inward and opening.

francine j. harris: francine j. harris is the author of play dead, winner of the Lambda Literary and Audre Lorde Awards and a finalist for the Hurston/Wright Legacy Award. Her first collection, allegiance, was a finalist for the Kate Tufts Discovery and PEN Open Book Awards. Originally from Detroit, she has received fellowships from the National Endowment for the Arts, the MacDowell Colony, and the Cullman Center for Scholars and Writers at the New York Public Library. She is an associate professor of English at the University of Houston.