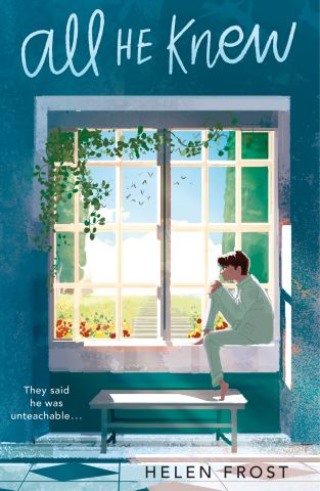 A novel in verse about a young deaf boy during World War II, the sister who loves him, and the conscientious objector who helps him. Inspired by true events.

Henry has been deaf from an early age—he is intelligent and aware of langauge, but by age six, he has decided it's not safe to speak to strangers. When the time comes for him to start school, he is labeled "unteachable." Because his family has very little money, his parents and older sister, Molly, feel powerless to help him. Henry is sent to Riverview, a bleak institution where he is misunderstood, underestimated, and harshly treated.

Victor, a conscientious objector to World War II, is part of a Civilian Public Service program offered as an alternative to the draft. In 1942, he arrives at Riverview to serve as an attendant and quickly sees that Henry is far from unteachable—he is brave, clever, and sometimes mischievous. In Victor's care, Henry begins to see how things can change for the better.

Heartbreaking and ultimately hopeful, Helen Frost's All He Knew is inspired by true events and provides sharp insight into a little-known element of history.

Helen Frost: Helen Frost is the author of several books for young people, including Hidden, Diamond Willow, Crossing Stones, The Braid, and Keesha’s House, selected an Honor Book for the Michael L. Printz Award. Helen Frost was born in 1949 in South Dakota, the fifth of ten children. She recalls the summer her family moved from South Dakota to Oregon, traveling in a big trailer and camping in places like the Badlands and Yellowstone. Her father told the family stories before they went to sleep, and Helen would dream about their travels, her family, and their old house. “That’s how I became a writer,” she says. “I didn’t know it at the time, but all those things were accumulating somewhere inside me.” As a child, she loved to travel, think, swim, sing, learn, canoe, write, argue, sew, play the piano, play softball, play with dolls, daydream, read, go fishing, and climb trees. Now, when she sits down to write, her own experiences become the details of her stories. Helen has lived in South Dakota, Oregon, Massachusetts, New York, Vermont, Scotland, Colorado, Alaska, California, and Indiana. She currently lives in Fort Wayne, Indiana, with her family.