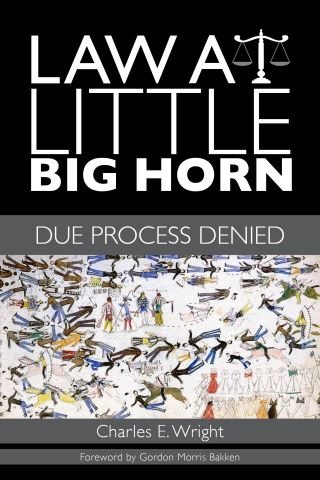 In 1876, the United States launched the Great Sioux War without a formal declaration of war by Congress. During the nineteenth century, the rights of American Indians were frequently violated by the president and ignored or denied enforcement by federal courts. However, Congress generally treated the Indians with good faith and honored due process, which prohibits the government from depriving any person of life, liberty, or property without a fair hearing before an impartial judge or jury. These due process requirements protect all Americans and apply to all branches of the government. Charles E. Wright analyzes the legal backdrop to the Great Sioux War, asking the hard questions of how treaties were to be honored and how the US government failed to abide by its sovereign word. Until now, little attention has been focused on how the events leading up to and during the Battle of Little Big Horn impacted American law. Though other authors have analyzed George Armstrong Custer’s tactics and equipment, Wright is the first to investigate the legal and constitutional issues surrounding the United States’ campaign against the American Indians. This is not just another Custer book. Its contents will surprise even the most accomplished Little Big Horn scholar.

Charles E. Wright: Born and raised in western Nebraska, Charles E. Wright is a retired lawyer who spent fifty years practicing in Nebraska and Colorado. He has long been associated with Indian rights and has funded scholarships and organized a mentoring program for promising Indian students from recognized tribes to attend law school.