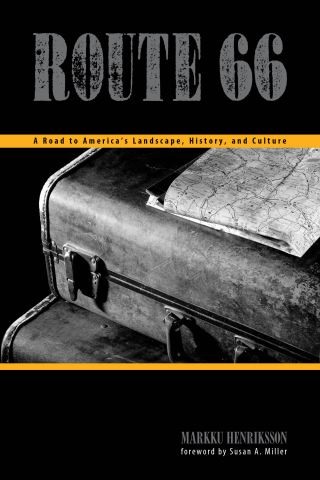 A Road to America’s Landscape, History, and Culture

When Markku Henriksson was growing up in Finland, the song “(Get Your Kicks on) Route 66” was one of only two he could recognize—in English or Finnish. It was not until 1989 that Henriksson would catch his first glimpse of the legendary highway. It was enough to lure Henriksson four years later to the second international Route 66 festival in Flagstaff. There he realized that Route 66 was the perfect basis for a multidisciplinary American Studies course, one that he has been teaching at the University of Helsinki ever since. Forming the soul of this work—and yielding a more holistic and complex picture than any previous study—are Henriksson’s 1996 (east to west) and 2002 (west to east) journeys along the full length of the Route and his mastery of the literature and film that illuminate the Route’s place in Americana. Not a history of the road itself and the towns along the way, Henriksson’s perspective offers insight into America and its culture as revealed in its peoples, their histories, cultures, and music as displayed along the Mother Road.

Markku Henriksson: McDonnell Douglass Chair of American Studies at the University of Helsinki, Markku Henriksson has lectured on Route 66 in Estonia, Sweden, and Canada, as well as Finland and the United States.