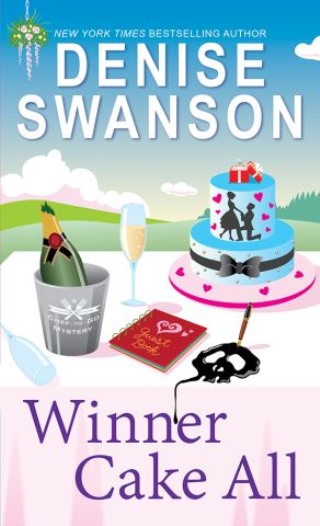 Once again, it looks like Dani Sloan will get a slice of the action...

In the small town of Normalton, IL, there aren't a lot of opportunities for small business owner Dani Sloan to cater big-ticket events. But that's about to change—a client named Yvette Joubert is marrying Franklin Whittaker, the richest guy around, and they want Dani to cater their engagement party! The swanky event is the perfect opportunity to put Dani on the map for wealthier clients.

But when a storm hits the party after guests arrive, it becomes clear that more than the dinner is ruined: Yvette is found dead beneath the marquee. Is her death a tragic accident, or a perfectly orchestrated murder? Then the case gets even juicier—it turns out that Yvette's ex-husband is Spencer Drake, Dani's almost-boyfriend, and the police start circling. Now Dani must follow an unending list of clues to save her business, her better half, and catch a criminal. Let's just hope they get their just desserts!

Denise Swanson: Denise Swanson is the New York Times bestselling author of the Scumble River mysteries, the Deveraux's Dime Store mysteries, and the Chef-to-Go mysteries, as well as the Change of Heart contemporary romances. She has been nominated for RT Magazine's Career Achievement Award, the Agatha Award, and the Mary Higgins Clark Award.