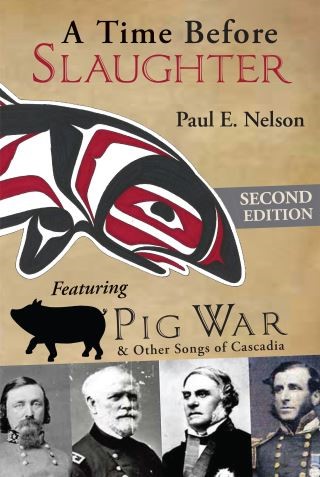 A Time Before Slaughter: Featuring Pig War & Other Songs of Cascadia

Tales From A Journey To Within

In this epic poem, Paul Nelson re-enacts the history of Auburn, Washington, originally known as the town of Slaughter. Written in the spirit of William Carlos Williams, Charles Olson, and Michael McClure, A Time Before Slaughter explores the history of this Northwestern place from the myths of Native people to the xenophobia toward Japanese-Americans, from the urge to control to the hunger for liberation. Set against the backdrop of a towering dormant volcano (Mt. Rainier), the beauty of the verse pays homage to the beauty of the place. "Here's one more big hunk of the American shoulder," said poet Michael McClure. "As Olson carved his from the North East, Nelson takes his from the Pacific North West. It's beautiful time-space in new words."

Paul E. Nelson: Paul E. Nelson founded SPLAB (Seattle Poetics LAB) in 1993 & the Cascadia Poetry Festival in 2012, is the winner of the 2015 Robin Blaser Award, he lives with his partner Bhakti and his daughter Ella Roque in the Cedar River watershed of the Cascadia bioregion and serves as Sam Hamill’s literary executor.