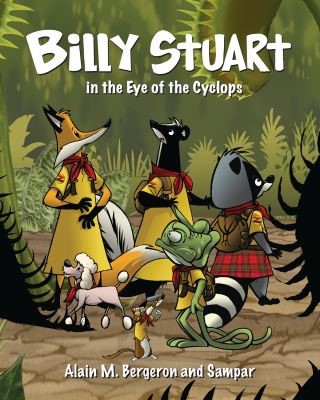 Billy Stuart in the Eye of the Cyclops

Billy Stuart, the young raccoon leader of the Zintrepids Scout troop, aspires to be just like his grandfather, a globe-trotting adventurer who knows no fear. After accidentally traveling through time in pursuit of the elder Stuart, Billy and friends find themselves lost in a land inhabited by giants: giant plants, giant animals, GIANT MONSTERS! Billy and his companions set off to explore the island, looking for fresh water and food. But a hailstorm forces them to take shelter in a grotto, where they find the trail of Billy’s grandfather, Virgil Stuart. However, following Grandpa’s footsteps turns out to be much more perilous than they expected. And stranded in the heart of this mysterious island, the Zintrepids can’t shake the feeling that they are being watched.

Brightly illustrated and enhanced with games and puzzles throughout, Billy Stuart in the Eye of the Cyclops is sure to amuse readers of all ages.

Alain M. Bergeron: A prolific author, Alain M. Bergeron has written over 300 children's books. He collaborated with Quebecois artist Sampar to create Billy Stuart and the Zintrepids, a colorful cast of Scouts that includes a raccoon, fox, chameleon, skunk and weasel. This intrepid crew made one fateful mistake and has been suffering the consequences ever since. Alain devotes himself exclusively to writing and leading school workshops, and his inexhaustible imagination has made him a fixture in children's literature and garnered many awards and accolades. Alain lives in Victoriaville, Quebec.