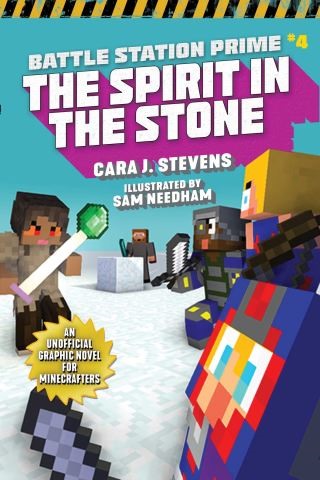 The Spirit in the Stone

An Unofficial Graphic Novel for Minecrafters

An evil spirit has invaded the Battle Station. Will the cadets be ready for the fight? Find out in the fourth installment of Battle Station Prime!

With the Prime Knight by their side, the young cadets of the Battle Station are convinced that no enemy is a match for their forces. But when one of their own group gets possessed by an evil spirit, it will take everything they have to get their friend back and banish the spirit from the realm for good.

Meanwhile, attacks are coming in from all sides. Waves of skeletons and zombies continue to assault the Battle Station and all of the outposts in the land. An unexpected alliance with a witch leads to an even more unexpected trip to the Far Lands, while a mission to discover the identity of their enemy will take the others through a desert temple.

All of this is a lot of responsibility for six young warriors, and most of the Battle Station leaders are not sure they can handle it. But fortunately, Ned, the Prime Knight, believes these young heroes have what it takes to survive and succeed to save the Battle Station and the entire realm. Pell, Logan, Maddy, Brooklyn, Cloud, and Zoe will do everything they can to make sure his bet on them pays off.

Cara J. Stevens: Cara J. Stevens has a deep and abiding love for video games, science fiction and writing. She began her career designing interactive games and stories based on books and is happy to come full circle, creating stories based on video games. She has written nine other books for kids, including the novel Dragon School. When she’s not writing or hanging out at the beach, she can be found playing pinball, WiiU, and classic Atari games. Cara lives in Old Greenwich, Connecticut with her husband, two children, and a loud, fluffy dog named Oliver.Sam Needham is a 2D and 3D animator and Illustrator who enjoys making art for the games, film, television, and comic book industries.