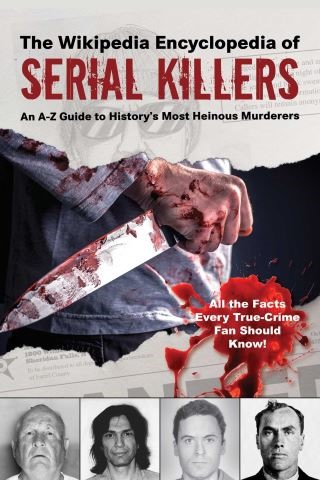 The Wikipedia Encyclopedia of Serial Killers

An A–Z Guide to History's Most Heinous Murderers

A Thorough, Comprehensive Guide to Serial Killers for True-Crime Fans

Equal parts fascinating and horrifying, the stories of serial killers like Ted Bundy and Jeffrey Dahmer have taken on a new cultural prominence with the rise of the true-crime genre. Now, The Wikipedia Encyclopedia of Serial Killers offers murder fans and curious readers a new opportunity to learn about the lives and histories of these infamous criminals in greater depth and detail than ever before.

Featuring extensive information about the backgrounds, crimes and aftermaths, victims, arrests and trials, and current lives of serial killers across the globe, as well as a variety of supplemental information—mug shots and crime-scene photos, letters from murderers, and information on victims and survivors—this book is an essential guide for all true-crime fans or any reader who wants an insight into the dark minds of the most notorious criminals in the world.

Included in The Wikipedia Encyclopedia of Serial Killers, among many others, are:

With nearly six million English-language articles covering essentially any topic imaginable, Wikipedia is one of the most visited websites on the internet and an important resource for anyone curious to learn about the world. This curated selection of content has been carefully selected and compiled by our editors to be the definitive book on the subject.

Wikipedia: Wikipedia is an online, collaboratively edited encyclopedia owned by the Wikimedia Foundation. With nearly six million English-language articles, it is the largest and most popular general reference work on the Internet and one of the top-five most-visited websites in the world. Time magazine has called it "the biggest (and perhaps best) encyclopedia in the world."