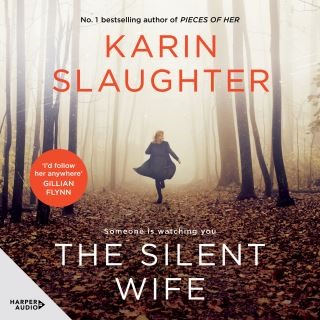 From the No.1 bestselling author comes a gripping new crime thriller featuring WILL TRENT and SARA LINTON.

A woman runs alone in the woods. She convinces herself she has no reason to be afraid, but she's wrong. A predator is stalking the women of Grant County. He lingers in the shadows, until the time is just right to snatch his victim.

A decade later, the case has been closed. The killer is behind bars. But then another young woman is brutally attacked and left for dead, and the MO is identical.

Although the original trail has gone cold -- memories have faded, witnesses have disappeared -- agent Will Trent and forensic pathologist Sara Linton must re-open the cold case. But the clock is ticking, and the killer is determined to find his perfect silent wife ...

'Fiction doesn't get any better than this' Jeffrey Deaver

'In a class of her own' West Australian

Karin Slaughter: Karin Slaughter is one of the world's most popular and acclaimed storytellers. Published in 120 countries with more than 35 million copies sold across the globe, her 20 novels include the Grant County and Will Trent books, as well as the Edgar-nominated Cop Town and the instant Sunday Times bestselling novels Pretty Girls, The Good Daughter, Pieces of Her and The Last Widow. Slaughter is the founder of the Save the Libraries project – a nonprofit organization established to support libraries and library programming. A native of Georgia, Karin Slaughter lives in Atlanta. Her standalone novel Pieces of Her is in development with Netflix and the Grant County and Will Trent series are in development for television.