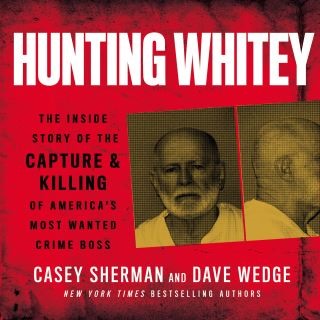 Based on exclusive, fresh reporting, the thrilling, definitive inside story of the pursuit, capture, and killing of legendary South Boston mob boss, James "Whitey" Bulger, detailing as never before his years on the run, how he evaded capture, and his brutal murder in prison.

For the first time, Boston reporters Casey Sherman and David Wedge draw on exclusive interviews and exhaustive investigative reportage to tell the complete story of Whitey Bulger, one of the most notorious crime bosses in American history—alongside Al "Scarface" Capone and Vito Genovese—and a longtime FBI informant. The leader of Boston’s Winter Hill Gang and #1 on the FBI’s Most Wanted list, Bulger was indicted for nineteen counts of murder, racketeering, narcotics distribution, and extortion. But it was his sixteen-year flight from justice on the eve of his arrest that made him a legend and exposed deep corruption within the FBI.

While other accounts have examined Bulger’s crimes, this remarkable chronicle tells the story of his life on the run, his capture, and his eventual murder inside one of America’s most dangerous prisons—"Misery Mountain"—in 2018. Interweaving the perspectives of Bulger, his family and cohorts, and law enforcement, Hunting Whitey explains how this dangerous criminal evaded capture for nearly two decades and shines a spotlight on the dedicated detectives, federal agents, and prosecutors involved in bringing him to justice. It is also a fascinating, detailed portrait of both Bulger’s trial and his time in prison—including shocking new details about his death at Misery Mountain less than twenty-four hours after his arrival.

Granted access to exclusive prison letters and interviews with dozens of people connected to the case on both sides, Sherman and Wedge offer a trove of fascinating new stories and create an incomparable portrait of one of the most infamous criminals in American history.

Casey Sherman and Dave Wedge are one of the premier nonfiction writing teams telling stories out of Boston. Together, they co-wrote the definitive story of the Boston Marathon bombings in Boston Strong: A City’s Triumph Over Tragedy, which was adapted for the Mark Wahlberg film Patriots Day. They also wrote Ice Bucket Challenge: Pete Frates and the Fight against ALS, which is in development as a feature film, and the New York Times bestselling 12: The Inside Story of Tom Brady’s Fight for Redemption.  They live in Boston.