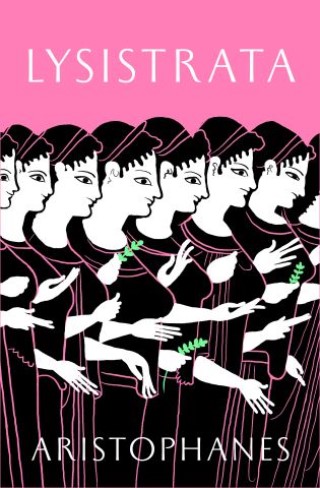 First presented in 411 BC, Lysistrata is one of the great works from the classical age of drama. It is the third and concluding play in Aristophanes’s War and Peace series and portrays a humorous battle of the sexes.

In the twenty-first year of the Peloponnesian War, desperate times call for desperate measures. Angry at being ignored in matters of state and tired of missing their husbands, the women of Athens—led by Lysistrata—refuse to have sex with their men until they put down their weapons.

“The reason for its enduring appeal is simple: sex and politics. The eponymous heroine and her militant sisterhood take two actions to make their men stop fighting: first, they stage a sex strike—the withdrawal of sexual favors until peace is declared; second, they occupy the Acropolis, freezing the funds necessary to keep the war going . . . Lysistrata has a serious story to tell. But like all good comedies, it knows when to stop taking itself too seriously.” —Blake Morrison, The Guardian

Aristophanes:
Aristophanes, son of Philippus, of the deme Kydathenaion, was a comic playwright of ancient Athens and a poet of Old Attic Comedy. Eleven of his forty plays survive virtually complete.