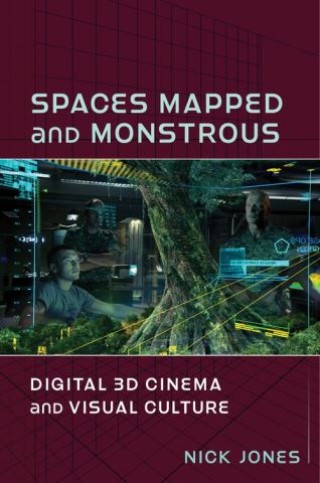 Digital 3D has become a core feature of the twenty-first-century visual landscape. Yet 3D cinema is a contradictory media form: producing spaces that are highly regimented and exhaustively detailed, it simultaneously relies upon distortions of vision and space that are inherently strange.

Spaces Mapped and Monstrous explores the paradoxical nature of 3D cinema to offer a critical analysis of an inescapable part of contemporary culture. Considering 3D’s distinctive visual qualities and its connections to wider digital systems, Nick Jones situates the production and exhibition of 3D cinema within a web of aesthetic, technological, and historical contexts. He examines 3D’s relationship with computer interfaces, virtual reality, and digital networks as well as tracing its lineage to predigital models of visual organization. Jones emphasizes that 3D is not only a technology used in films but also a tool for producing, controlling, and distorting space within systems of surveillance, corporatization, and militarization. The book features detailed analysis of a wide range of films—including Avatar (2009), Goodbye to Language (2014), Love (2015), and Clash of the Titans (2010)—demonstrating that 3D is not merely an augmentation of 2D cinema but that it has its own unique properties. Spaces Mapped and Monstrous brings together media archaeology, digital theory, and textual analysis to provide a new account of the importance of 3D to visual culture today.

Nick Jones: Nick Jones is a lecturer in film, television, and digital culture at the University of York. He is the author of Hollywood Action Films and Spatial Theory (2015).