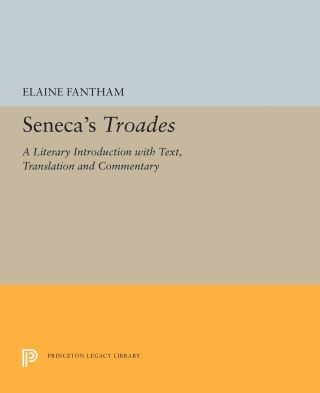 A Literary Introduction with Text, Translation and Commentary

Elaine Fantham provides here a fresh Latin text of Seneca's Traodes and an English version, with an extensive introduction and critical commentary--the first separate treatment of the play in English since Kingery's 1908 edition. Arguing that the Troades was not intended for stage production, the author also discusses the atmosphere of Rome at the time the play was written, when both political and poetic life were felt to be in decline. Although Seneca's plays reflect his experience of tyranny, corruption, and compromise, they are enriched by his contract with the nobler world of poetry. Demonstrating how Seneca loved and imitated the Augustan poets, Professor Fantham reveals the originality that is part of his imitation.
Professor Fantham discusses not only the particular characteristics of Seneca's generation but the interplay of his moral and poetic concerns in relationship to his subject--the Trojan captivity.By analyzing his reactions to accounts of this theme in Homer, Euripides, and Augustan epic, she explains his methods and motives in composition.
Comparison of the play with Seneca's other works and with other drama exposes some inconsistency, formulaic writing, and excess of ingenuity. It also reveals the influence of epic in loosening his dramtic form and makes apparent his immense vitality.
Elaine Fantham is Professor of Classics at the University of Toronto and author of Comparative Studies in the Republican Latin Imagery (Toronto).

The Princeton Legacy Library uses the latest print-on-demand technology to again make available previously out-of-print books from the distinguished backlist of Princeton University Press. These editions preserve the original texts of these important books while presenting them in durable paperback and hardcover editions. The goal of the Princeton Legacy Library is to vastly increase access to the rich scholarly heritage found in the thousands of books published by Princeton University Press since its founding in 1905.