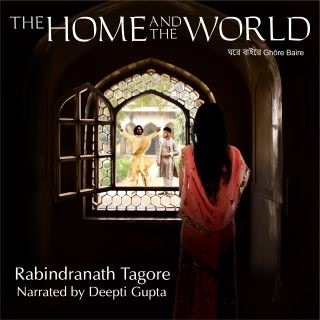 The Home and the World

Audie-nominated narrator Deepti Gupta shares a classic love story set among the fires of India’s struggle for independence. Bimala is torn between her commitment to her husband, Nikhil, who holds Western beliefs, and the radical Sandip, a leader of the Swadeshi movement under the British Raj. Bimala finds herself asking what freedom truly means for herself and for her country.

Author, poet, and Nobel laureate, Sir Rabindranath Tagore sets the story on a Bengali noble’s estate in 1908. It is both a love story and a novel of political awakening. Bimala’s attempts to resolve the irreconcilable—pressures of home and the world—reflect the conflict in India itself. The tragic outcome foreshadows the unrest that accompanied Partition in 1947.

Rabindranath Tagore: Rabindranath Tagore was born in 1861. He was the fourteenth child of Debendranath Tagore, head of the Brahmo Samaj. The family house at Jorasanko was a hive of cultural and intellectual activity and Tagore started writing at an early age. In the 1890s he lived in rural East Bengal, managing family estates. He was involved in the Swadeshi campaign against the British in the early 1900s. In 1912 he travelled to England with Gitanjali, a collection of English poems and won the Nobel Prize for Literature in 1913. Tagore was knighted in 1915, an honour he repudiated in 1919 after the Jallianwala Bagh massacre. In the 1920s and 1930s he lectured extensively in America, Europe, the Far East and Middle East. Proceeds from these and from his Western publications went to Visva-Bharati, his school and university at Santiniketan. Tagore was a prolific writer; his works include poems, novels, plays, short stories, essays and songs. Late in his life Tagore took up painting, exhibiting in Moscow, Berlin, Paris, London and New York. He died in 1941.