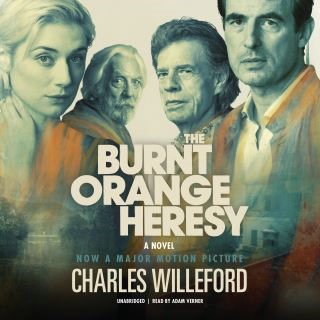 This is the classic neo-noir novel acclaimed as Charles Willeford’s best and the basis for a 2020 major motion picture.

Fast-talking, backstabbing, womanizing, and fiercely ambitious art critic James Figueras will do anything—blackmail, burglary, and beyond—to make a name for himself. When an unscrupulous collector offers Figueras a career-making chance to interview Jacques Debierue, the greatest living—and most reclusive—artist, the critic must decide how far he will go to become the art-world celebrity he hungers to be. Will Figueras stop at the opportunity to skim some cream for himself or push beyond morality’s limits to a bigger payoff?

Crossing the art world with the underworld, Willeford creates a novel of dark hue and high aesthetic polish. The Burnt Orange Heresy—the 1970s crime classic now back in print—has lost none of its savage delights as it re-creates the making of a murderer, calmly and with exquisite tension, while satirizing the workings of the art world as the ultimate con.

Charles Willeford (1919-1988) was an American writer of fiction, poetry, autobiography, literary criticism, and twenty novels, best known for his Hoke Moseley series, including Miami Blues, as well as such classics as Cockfighter and The Woman Chase.