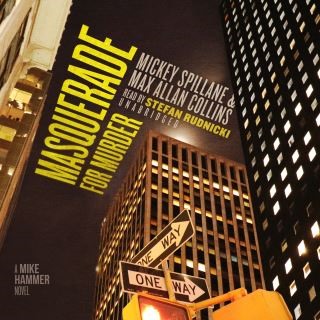 Hammer is at a high society party when a wealthy and well-respected man, Colby, is hit by a car and badly injured. When all he expected was a night on the town, Mike is hired to find out who was driving the car. His search leads him on a trail of murders, the victims often exhibiting the same kind of strangulation as the cause of death. How are they connected to an accident involving Corby, and why is the man himself acting so strangely?

Mickey Spillane:
Mickey Spillane (1918-2006) was an American crime writer. Many of his novels featured the detective Mike Hammer. Born in Brooklyn, New York, Spillane sold his first story to a pulp magazine by the time he graduated from high school. He served as a fighter pilot in the army air corps in World War II, and published his first novel, I, the Jury, in 1947. With over two hundred twenty-five million copies of his books sold internationally, Spillane ranks as one of the world's most popular mystery writers.
Max Allan Collins is an award-winning writer of mysteries, comics, thrillers, screenplays, and historical fiction. His graphic novel Road to Perdition was the basis for the 2002 Academy Award-winning film by the same name. He collaborated with Mickey Spillane on several projects and is completing a number of the Mike Hammer novels that Spillane left unfinished. Collins lives in Iowa with his wife, author Barbara Collins.
|||

Max Allan Collins, the recipient of a 2017 Mystery Writers of America Grand Master Award, has earned fifteen Shamus nominations, winning twice for his Nathan Heller novels. His graphic novel Road to Perdition was the basis of the Academy Award–winning film, and his CSI books have been on the USA Today and New York Times bestsellers lists. Collins’ The New Adventures of Mike Hammer: The Little Death, starring Stacy Keach, won an Audie in 2011 for Best Original Work.