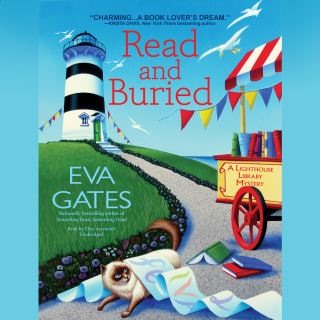 Librarian Lucy Richardson unearths a mysterious map dating back to the Civil War. But if she can’t crack its code, she may end up read and buried.

The Bodie Island Lighthouse Library Classic Novel Book Club is reading Journey to the Center of the Earth by Jules Verne while workers dig into the earth to repair the Lighthouse Library’s foundations. The digging halts when Lucy pulls a battered tin box containing a Civil War–era diary from the pit. Tucked inside is a hand-drawn map of the Outer Banks, accompanied by a page written in an indecipherable code.

The library is overrun by people clamoring to see the artifact. Later that night, Lucy and Connor McNeil find the body of historical society member Jeremy Hughes inside the library. Clearly Jeremy was not the only one who broke into the library—the map and the coded page are missing.

Lucy’s nemesis, Louise Jane McKaughnan, confesses to entering the library after closing to sneak a peek but denies seeing Jeremy—or his killer. When Lucy discovers that fellow-librarian Charlene had a past with Jeremy, she’s forced to do what she vowed not to do—get involved in the case. Meanwhile, the entire library staff and community become obsessed with trying to decode the page. But when the library has a second break in, it becomes clear that someone is determined to solve that code.

Eva Gates began her writing career as a Sunday writer: a single mother of three high-spirited daughters, with a full-time job as a computer programmer. Now she has more than twenty novels under her belt, all in the mystery genre, published under the name Vicki Delany.