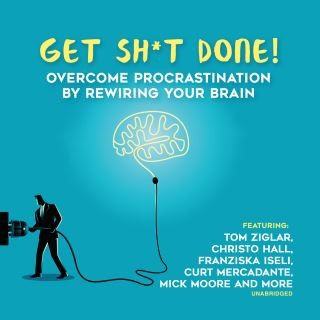 Overcome Procrastination by Rewiring Your Brain

What would you do if you knew you would succeed, and nothing could hold you back?

Would you pursue a dream that feels unattainable? Would you finally sign up for that master’s program? Would you make a to-do list and actually follow through with it?

Get Sh*t Done is a series of audio programs designed to help you practice self-discipline, overcome procrastination, and train your brain to believe that possibilities are endless. From scientific ways to break patterns of thinking to a practical methodology for goal setting (and achieving), you’ll quickly learn that success is more accessible than you believe. Whether you’re a student, high-level executive or CEO of a major company, the audio programs in this compilation will provide you with the tools you need to get sh*t done.

If you’re ready to kickstart your journey to greater success and eliminate excuses that are holding you back, it’s time to take the step and learn from the experts. You won’t regret it!

Laura Stack is a personal productivity expert, bestselling author of four books, and a professional speaker whose mission is to build high-performance productivity cultures in organizations by creating maximum results in minimum time. She is the president of the Productivity Pro, Inc., a time-management training firm specializing in productivity improvement in high-stress organizations, and the 2011–2012 president of the National Speakers Association. Since 1992 Laura has presented keynotes and seminars on improving output, lowering stress, and saving time in today’s workplaces. Laura has been featured on CBS’s Early Show, CNN, and the New York Times; her clients include Walmart, Starbucks, Cisco Systems, and Bank of America.

Jeff Davidson, the Work-Life Balance Expert®, has written over fifty mainstream books, is a preeminent authority on time management, and is an electrifying professional speaker, making nearly eight hundred presentations since 1985 to clients such as Kaiser Permanente, IBM, American Express, Lufthansa, Swissôtel, America Online, RE/Max, USAA, Worthington Steel, and the World Bank. He is the author of Breathing Space and Simpler Living. His 60 Second Series with Adams Media, including the 60 Second Organizer, 60 Second Self-Starter, and 60 Second Innovator, are popular titles in China, Japan, Malaysia, Indonesia, Russia, Turkey, Saudi Arabia, Italy, Poland, Spain, France, and Brazil. Jeff has been widely quoted in the New York Times, USA Today, Washington Post, Los Angeles Times, and Christian Science Monitor. Cited by Sharing Ideas magazine as a “consummate speaker,” Jeff believes that career professionals today in all industries have a responsibility to achieve their own sense of work-life balance, and he supports that quest through his website BreathingSpace.com.

Dr. Larry Iverson has educated, motivated, and entertained audiences for nearly thirty years. A top-ten bestselling author on iTunes, he has worked with over one million people—everyone from Olympic athletes to Fortune 500 companies—delivering persuasive communication strategies and leadership tactics you can apply right now.

Dianna Booher is the author of forty-eight books, published in sixty-one foreign-language editions, with approximately four million copies sold. She is founder and CEO of Booher Research Institute. She also founded and served as CEO of Booher Consultants, Inc., a communication training firm, for more than three decades. In both organizations, she taught communication programs and coached executives on leadership communication issues.

Bob Proctor has focused his entire agenda around helping people create lush lives of prosperity, rewarding relationships, and spiritual awareness. After rising to the position of vice president of sales at Nightingale-Conant, he established his own seminar company. He now travels the globe, teaching thousands of people how to believe in and act upon the greatness of their own minds.

|||
As a talented author and speaker his international appeal has transcended every color, culture, and career. Recognized by his peers as the quintessential motivational genius of our times, Zig Ziglar’s unique delivery style and powerful messages have earned him many honors and today he is considered one of the most versatile authorities on the science of human potential. Having shared the stage with Presidents Ford,Reagan and Bush,General Norman Schwarzkopf and Secretary of State Colin Powell, Dr.Norman Vincent Peale, Paul Harvey and Dr. Robert Schuller, he is one of the most sought after personal development trainers in the world. As a patriot he has been recognized three times in the Congressional Record of the United States for his work with youth in the drug war and for his dedication to America and the free enterprise system. Titans of business, politics and sports consider him to be the single greatest influence in their lives.
|||

Marcia Wieder, CEO and founder of Dream University, is leading a dream movement. Whether teaching at the Stanford Business School, speaking to executives in China, or visiting a Girl Scout camp, her riveting style impacts audiences worldwide. She’s been coaching, training, and speaking for twenty years, and her inspiring message has touched audiences from fifty to five thousand at companies like AT&T and American Express. The author of over a dozen books and a thought leader on vision, she has appeared on Oprah and Today, is the personal dream coach to Jack Canfield, stars in Beyond the Secret with Bob Proctor, and is a member of the Transformational Leadership Council with John Gray, Lynne Twist, and Marianne Williamson. As past president of the National Association of Women Business Owners, she met former US presidents Ronald Reagan, Jimmy Carter, and George Bush, Sr. As a columnist for the San Francisco Chronicle, she urged readers to take “The Great Dream Challenge.”

Chris Widener is a successful businessman, author, speaker, and television host. He has authored over 450 articles and numerous books; he has also produced many CDs and DVDs on leadership, motivation, and success. Widener was previously the host of the national interview show Made for Success and cohost of True Performance with Zig Ziglar. As a public speaker, he has presented to organizations such as General Electric, Microsoft, Cisco Systems, and the Harvard School of Business.