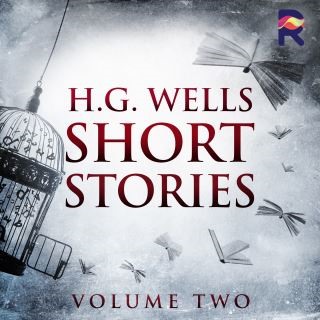 Raconteurs Audio and Spoken Realms team up once again to bring this second collection of short stories by H. G. Wells to audio. Written between 1894 and 1902, this anthology of thirteen stories delves into botany, flying machines, travel, distant lands and customs, virology, magic, taxidermy, journalism—and there’s even a ghost story.

Warning: “Aepyornis Island” includes words which, though in common usage at the time it was written, may now cause offence.

H. G. Wells (1866–1946), born in Bromley, Kent, England, was apprenticed to a draper and a chemist before he made his way to the Royal College of Science where he studied biology. Known as the father of science fiction, he was also a prolific writer in other genres, including contemporary novels, history, and social commentary. As a spokesman for progress and peace, his middle period novels (1900–1920) were more realistic and covered lower and middle-class life, suffrage, and the emergence of feminist ideals that pushed against the limits set by a patriarchal society.