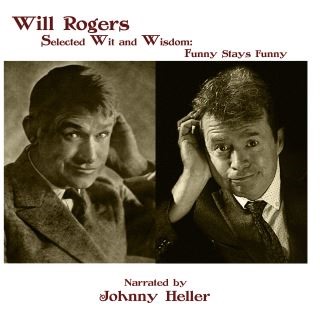 Will Rogers—pithy, political, and plainspoken—was one of the finest entertainers of his generation. As a great American humorist, it was considered an honor to be made fun of by him. By the time of his death in 1935, he had traveled the globe three times, written some four thousand articles, and was one of America’s highest-paid film stars.

He began his act in Vaudeville by saying, “All I know is what I read in the papers,” while idly swinging a lasso he used for rope tricks. He won the hearts of the American people with his warm smile and swift wit, and poked fun at almost every prominent person of his day while still remaining friendly with every one of them.

This audiobook contains a few selections from his outstanding work, giving you a taste of Will Rogers you’ll want to listen to again and again.

Will Rogers (1879–1935) was an American humorist, actor, and author best known for his Broadway and film performances, as well as his folksy persona. After performing in Wild West shows as a young man, Rogers broke into vaudeville and then Broadway. His folksy wit and common sense attitude made him one of the most famous actors and authors in the world in the 1920s and ’30s.

|||Working in every genre, Johnny Heller has narrated over seven hundred audiobooks. He is a 2005 and 2009 Audie Award winner, a double nominee in 2015, a 2014 nominee for Best Male Narrator, a double nominee in 2012 and was named a Best Voice of 2008-2011, 2014, 2015 and a Publishers Weekly Listen Up Award Winner 2008-2013. A winner of over twenty-five AudioFile Earphones Awards, AudioFile magazine named Heller one of the top fifty voices of the twentieth century. Johnny coaches actors in audiobook narration and commercial voice-over locally, nationally and internationally.