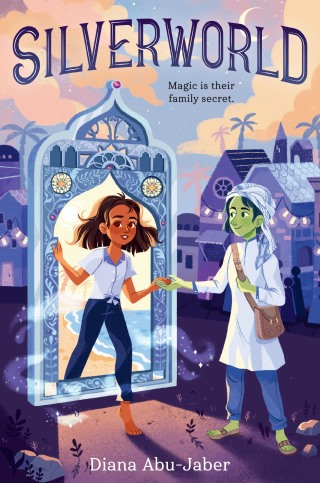 Fall under the spell of this fantasy-adventure story about a Lebanese-American girl who finds the courage to save her grandmother. Perfect for fans of The Girl Who Drank the Moon.

Sitti, Sami's Lebanese grandmother, has been ill for a while, slipping from reality and speaking in a language only Sami can understand. Her family thinks Sitti belongs in a nursing home, but Sami doesn't believe she's sick at all. Desperate to help, Sami casts a spell from her grandmother's mysertious charm book and falls through an ancient mirror into a world unlike any other.

Welcome to Silverworld, an enchanted city where light and dark creatures called Flickers and Shadows strive to live in harmony. But lately Flickers have started going missing, and powerful Shadow soldiers are taking over the land.

Everyone in Silverworld suspects that Shadow Queen Nixie is responsible for the chaos, which is bad enough. But could Nixie be holding Sami's grandmother in her grasp too? To save Sitti and Silverworld, Sami must brave adventure, danger, and the toughest challenge of all: change.

Diana Abu-Jaber: Diana Abu-Jaber is most recently the author of Birds of Paradise, an Indie Books Pick, as well as the award-winning memoir The Language of Baklava and the bestselling novels Origin and Crescent, which were awarded the PEN Center USA Award for Literary Fiction and the American Book Award. Her first novel, Arabian Jazz, won the Oregon Book Award and was a finalist for the PEN/Hemingway Award. Silverworld is Diana's first novel for children and started as a tale she told to entertain her young niece while vacationing in a condo lined with mirrors!

A frequent contributor to NPR, she teaches at Portland State University and divides her time between Portland and Miami. Find her online at @dabujaber or on her website dianaabujaber.com.