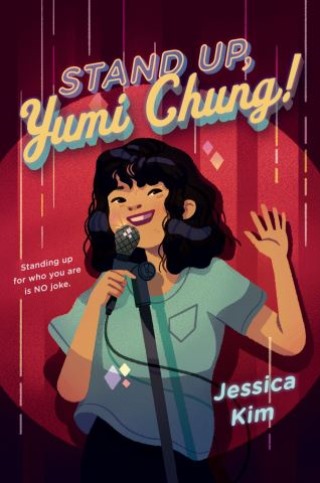 One lie snowballs into a full-blown double life in this irresistible story about an aspiring stand-up comedian.

On the outside, Yumi Chung suffers from #shygirlproblems, a perm-gone-wrong, and kids calling her "Yu-MEAT" because she smells like her family's Korean barbecue restaurant. On the inside, Yumi is ready for her Netflix stand-up special. Her notebook is filled with mortifying memories that she's reworked into comedy gold. All she needs is a stage and courage.

Instead of spending the summer studying her favorite YouTube comedians, Yumi is enrolled in test-prep tutoring to qualify for a private school scholarship, which will help in a time of hardship at the restaurant. One day after class, Yumi stumbles on an opportunity that will change her life: a comedy camp for kids taught by one of her favorite YouTube stars. The only problem is that the instructor and all the students think she's a girl named Kay Nakamura--and Yumi doesn't correct them.

As this case of mistaken identity unravels, Yumi must decide to stand up and reveal the truth or risk losing her dreams and disappointing everyone she cares about.

Jessica Kim: Jessica Kim writes about Asian American girls finding their way in the world. Before she was an author, Jessica studied education at UC Berkeley and spent ten years teaching third, fourth, and fifth grades in public schools. Like Yumi, Jessica lives with her family in Southern California and can't get enough Hot Cheetos, stand-up comedy, BTS, and Korean barbecue.