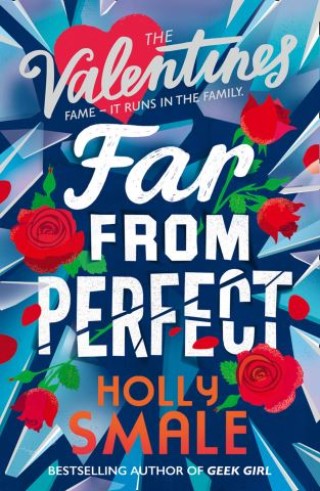 Far From Perfect (The Valentines, Book 2)

The second sensational book in the Valentines series – a hilarious and heart-aching story about the impossible standards for being a girl.

Enthusiastic but not desperate; calm but not dull; funny but not try-hard; sparky but not crazy; feisty but not aggressive; beautiful but relatable; elegant but not icy; confident but not arrogant; feminine but not girly; nice but not boring.

Faith Valentine has it all – fame, money and extraordinary beauty. But what she wants more than anything is a quiet life away from the cameras. Except nobody ever asks Faith what she wants, and her family’s expectations are crushing her.

The world thinks she’s perfect, but is there is more to perfection than meets the eye?

Holly Smale is the author of Geek Girl, Model Misfit, Picture Perfect and All That Glitters. She was unexpectedly spotted by a top London modelling agency at the age of fifteen and spent the following two years falling over on catwalks, going bright red and breaking things she couldn’t afford to replace. By the time Holly had graduated from Bristol University with a BA in English Literature and an MA in Shakespeare she had given up modelling and set herself on the path to becoming a writer.