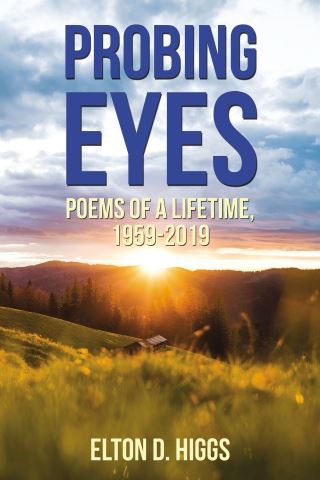 Probing Eyes is a collection of 156 poems written over a period of 60 years by a Christian professor of English literature. The first and largest section is called “Scriptural Extensions,” and it seeks to throw fresh light on various Scriptural situations by either projecting the personality of a character though a dramatic monologue or offering a fresh slant on the events depicted. These poems proceed from asking the question, “I wonder what this biblical character was thinking in the midst of these events.” The second section, “Interactions,” presents some of the author’s experiences in interfacing with others, from family and friends to people only casually known. The third section, “Perspectives on Time, consists of poems written mostly as New Year’s meditations, dealing with how we as Christians are affected by the passage of time; while the inexorable flow of time reminds of our finiteness and mortality, it also challenges us to understand how God, Who is timeless, is master of our limitations. The final section, “Personal and Meditative,” is a miscellanea of personal and occasional ruminations, some serious and others playful. The book has four indexes to facilitate finding a poem by title, chronological placement, Scriptural reference, or topic. The author hopes that these poems will thus lend themselves to use for private Bible study and sermon or worship application. The most fruitful reading of the poems, especially of those for which a Scriptural reference is given, will come from a careful look at the relevant biblical texts.

This book is not presented as the work of a main-stream poet, for Prof. Higgs has pursued his poetry writing as an avocation, not a profession. He has opted for clarity over artistic sophistication, which may not commend him to contemporary critics and practitioners of poetic composition. At the same time, the author aspires to go beyond the kind of religious versification whose primary purpose is to convey a moral lesson through rhyming lines. That is not an ignoble objective, but it does not embrace a full participation in the linguistic complexity that characterizes serious poetry. Dr. Higgs seeks in his poems to combine the beauty of art with the beauty of Truth, and thereby to stimulate fresh attention to who God is and how He works with the people of His creation.

The style of Probing Eyes is mainly free verse, but with regular use of internal rhyme, assonance, and alliteration. The reader may see reflected in this style Prof. Higgs’s admiration for the poetry of Gerard Manly Hopkins, George Herbert, John Donne, and (in conversational tone) Robert Frost. But above all, the author hopes that readers find evidence of the influence of the Holy Spirit, ad gloriam dei.

Prof. Higgs was raised in a Christian family in Abilene, TX, where in 1965 he received a B. A. in English from Abilene Christian College. He earned a Ph.D in English from the University of Pittsburgh in 1965, after which he taught for 36 years at the University of Michigan-Dearborn, retiring in 2001. He lives with his wife Laquita in Jackson, MI, where their two adult daughters also reside, and where he continues to be active in writing Christian meditations and poetry.