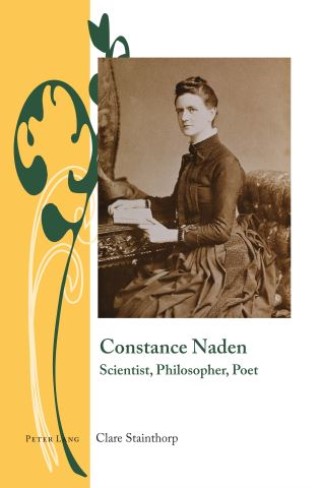 Constance Naden (1858–1889) is a unique voice in Victorian literature and science. This book, the first full-length critical account of her life and works, brings into focus the reciprocal nature of Naden’s poetry, philosophical essays and scientific studies. The development of Naden’s thinking is explored in detail, with newly discovered unpublished poems and notes from her adolescence shedding important light upon this progression.

Close readings of Naden’s wide-ranging corpus of poetry and prose trace her commitment to an interdisciplinary world-scheme that sought unity in diversity. This book demonstrates how a rigorous scientific education, a thorough engagement with poetry and philosophy of the long nineteenth century, an involvement with the Victorian radical atheist movement, and a comic sensibility each shaped Naden’s intellectual achievements. Naden sought to show how the light of reason is made even brighter by the spark of poetic creation and how the imagination is as much a tool of the scientist and the philosopher as the artist.

Taking a comprehensive approach to this complex and overlooked figure of the Victorian period, Stainthorp demonstrates how Naden’s texts provide a new and important vantage point from which to consider synthetic thinking as a productive and creative force within nineteenth-century intellectual culture.

This book was the winner of the 2017 Peter Lang Young Scholars Competition in Nineteenth-Century Studies.

Clare Stainthorp: Clare Stainthorp, a specialist in Victorian literature and intellectual history, was the 2017-18 Nineteenth-Century Matters Fellow at Cardiff University. She has lectured at the University of Birmingham, where she completed a PhD in English Literature in 2017. Her research has been published in Victorian Poetry, Victorian Literature and Culture and Journal of Victorian Culture. Her next project focuses on the nineteenth-century freethought movement and periodical press, preliminary research for which has been supported by a Curran Fellowship from the Research Society for Victorian Periodicals.