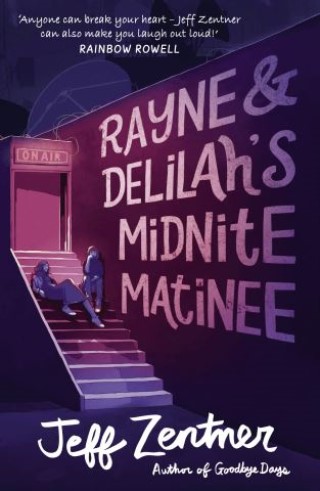 Josie and Delia are best friends and co-hosts on their own public access TV show, Midnite Matinee. They dress as vampires Rayne and Delilah, perform daft skits involving skeleton raves and dog weddings, and show the weekly so-bad-it's-good low-budget horror movie. But the end of senior year is coming, and Josie is torn between pursuing her television dreams in a new city or staying making TV with her BFF. What's more, she's just met a boy, Lawson, who is totally not her type, but is just a little bit intriguing . . . Meanwhile, Delia is searching for her dad, who walked out on her and her mom ten years ago. When the private investigator she hired unearths his contact details, she agonises over digging up the past.

A road trip to ShiverCon, a convention for horror filmmakers, may just have the answers the two need - but will Josie and Delia be prepared for life taking some seriously unexpected plot-twists?

Jeff Zentner: Jeff Zentner was a singer-songwriter and guitarist who released five albums and appeared on recordings with Iggy Pop, Nick Cave, and Debbie Harry. He is now an appellate attorney for the State of Tennessee and lives in Nashville with his wife and son. He wrote his debut novel The Serpent King in a month, writing on his mobile phone on his commute and at night, weekends and lunchtimes between court cases.