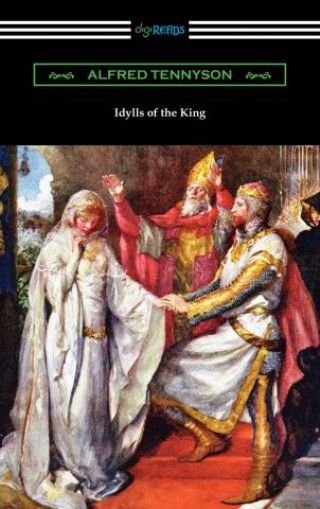 Idylls of the King

A cycle of twelve narrative poems, “Idylls of the King” is Alfred Tennyson’s classic 19th century retelling of Arthurian legend. Linked by their common focus, these poems relate the stories of King Arthur’s ascent to power, quest to create a perfect kingdom, and his eventual defeat. Included in this epic work are the stories of Arthur’s love for Guinevere, their marriage, and her betrayal. Much of the work is also devoted to the exploits of the knights of the round table as well as the involvement of the wizard Merlin. Tennyson relied heavily on previous Arthurian works including Sir Thomas Malory’s “Le Morte d’Arthur”, which was first published in 1485, and the “Mabinogion”, one of the earliest prose stories of Britain, one based on older oral traditions, written during the 12th century. However, “Idylls of the King” is not merely a retelling of the same stories of these previous works, but rather an expansion of the legend and an effort to bring the concerns and values of Victorian England to these timeless tales. Tennyson’s poems are a complex, beautiful, and thoughtful addition to the genre of Arthurian literature. This edition includes a biographical afterword.