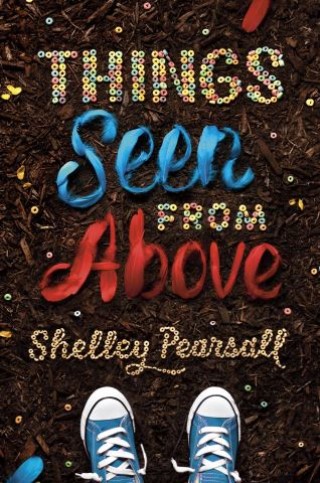 Things Seen from Above

A shift in perspective can change everything.

This brilliant new novel from the author of The Seventh Most Important Thing celebrates kids who see the world a little differently.

April is looking for an escape from the sixth-grade lunch hour, which has become a social-scene nightmare, so she signs up to be a "buddy bench monitor" for the fourth graders' recess.

Joey Byrd is a boy on the fringes, who wanders the playground alone, dragging his foot through the dirt. But over time, April realizes that Joey isn't just making random circles. When you look at his designs from above, a story emerges... Joey's "bird's eye" drawings reveal what he observes and thinks about every day.

Told in alternating viewpoints--April's in text and Joey's mostly in art--the story gives the "whole picture" of what happens as these two outsiders find their rightful places.

Shelley Pearsall: A former teacher and museum historian, SHELLEY PEARSALL is now a full-time author. Her first novel, Trouble Don't Last, won the Scott O'Dell Award for Historical Fiction. Her latest book was The Seventh Most Important Thing, which earned three starred reviews and was named an ALA Notable Book. To learn more about the author and her work, visit ShelleyPearsall.com.