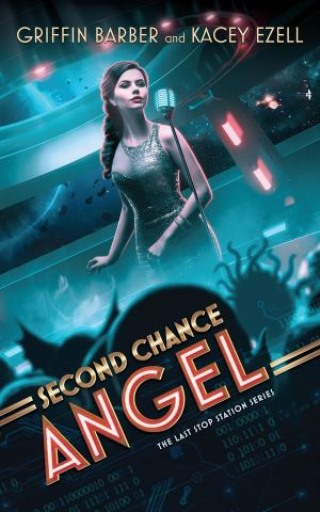 After a devastating galactic war, disgraced veteran Ralston Muck ekes out a living as a bouncer at Last Stop Station’s premier nightclub, A Curtain of Stars. Night after night he listens to the club’s star performer, Siren, sing her memories and ease some of his aching loss. But when Siren goes missing, Muck finds himself drawn into a world of dirty cops, drug lords, and conspiracies that trace back to the war itself.

The only person he can trust isn’t even human. Angel, Siren’s personal AI, was ripped from the singer’s mind the night Siren disappeared. With no idea what has happened to her human host, and pursued by a killer virus, Angel flees to Muck for answers.

Together they struggle to comprehend the conspiracy that entangles both their lives. Can Muck and the angel on his shoulder recover Siren before it’s too late? Or will he lose everything that matters to him one more time?

Griffin Barber spent his youth in four different countries, learning three languages while holding down jobs in marinas, bars, cafés, and, memorably, cold-calling casino guests. Finally settled in Northern California with a day job as a police officer in a major metropolitan department, he lives the good life with his wife and daughter. 1636: Mission to the Mughals, coauthored with Eric Flint, was his first novel; he has also written numerous short stories. Second Chance Angel is what he hopes to be the first of many collaborations with Kacey Ezell.

Kacey Ezell is the author of the Four Horseman Tales and the Revelations Cycle.