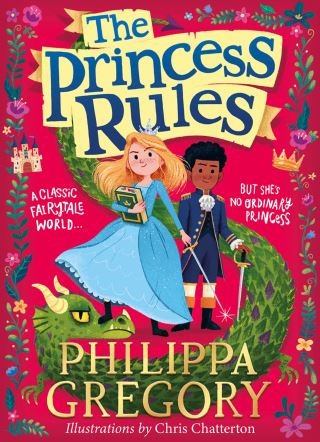 Princess Florizella may live in a classic fairy-tale world, but she’s no ordinary princess…

“Princess Florizella was friends with some of the princesses who had studied the Princess Rules, and behaved just as the Rules said they should. Florizella thought their hair was lovely: so golden and so very long. And their clothes were nice: so richly embroidered. And their shoes were delightful: so tiny and handmade in silk. But their days bored her to death…”

Instead, Princess Florizella rides her horse, Jellybean, all over the kingdom, having adventures of her own…

“These are enchanting, simply written stories that have lost none of their pertinence – and this timely new edition deserves to win Florizella another generation of admirers.” 5 star review in the Saturday Telegraph

Philippa Gregory is an internationally renowned author of historical novels. She holds a PhD in eighteenth-century literature from the University of Edinburgh. Works that have been adapted for television include A Respectable Trade, The Other Boleyn Girl and The Queen's Fool. The Other Boleyn Girl is now a major film, starring Scarlett Johansson, Natalie Portman and Eric Bana. Philippa Gregory lives in the North of England with her family.

Philippa Gregory is an internationally renowned author of many bestselling novels.  Works that have been adapted for television and film include A Respectable Trade, The Other Boleyn Girl and The Queen's Fool. Philippa founded the charity: Gardens for the Gambia over twenty years ago which has raised funds and paid for over 200 wells in the primary schools of this African country.Philippa Gregory lives with her family on a small farm in Yorkshire.