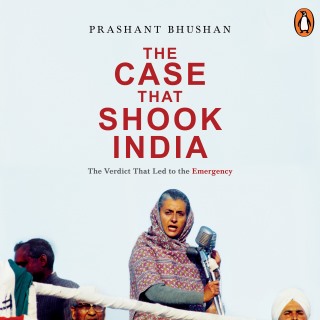 The Case that Shook India: The Verdict That Led to the Emergency

On 12 June 1975, for the first time in independent India's history, the election of a prime minister was set aside by a high court judgment. The watershed case, Indira Gandhi v. Raj Narain, acted as the catalyst for the imposition of the Emergency. Based on detailed notes of the court proceedings, The Case That Shook India is both a significant legal and a historical document.

The author, advocate Prashant Bhushan, provides a blow-by-blow account of the goings-on inside the courtroom as well as the manoeuvrings outside it, including threats, bribes and deceit. As the case goes to the Supreme Court, we see how a ruling government can misuse legislative power to save the PM's election.

Prashant Bhushan: Prashant Bhushan is an eminent public interest lawyer in the Supreme Court of India, most known for cases such as 2G and Coal Scam. He is also an activist and a founder member of Swaraj Abhiyan-a campaign organization that focuses on various issues such as the environment, human rights, corruption and good governance. He was a prominent member of the group India Against Corruption (IAC) and worked alongside Anna Hazare for the implementation of the Jan Lokpal Bill (Citizen's Anti-corruption Ombudsman Bill).