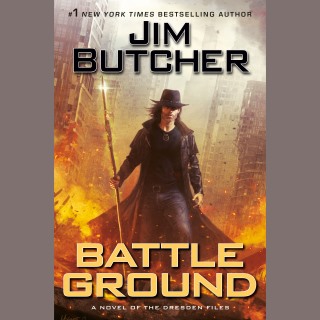 THINGS ARE ABOUT TO GET SERIOUS FOR HARRY DRESDEN, CHICAGO’S ONLY PROFESSIONAL WIZARD, in the next entry in the #1 New York Times bestselling Dresden Files.

Harry has faced terrible odds before. He has a long history of fighting enemies above his weight class. The Red Court of vampires. The fallen angels of the Order of the Blackened Denarius. The Outsiders.

But this time it’s different. A being more powerful and dangerous on an order of magnitude beyond what the world has seen in a millennium is coming. And she’s bringing an army. The Last Titan has declared war on the city of Chicago, and has come to subjugate humanity, obliterating any who stand in her way.

Harry’s mission is simple but impossible: Save the city by killing a Titan. And the attempt will change Harry’s life, Chicago, and the mortal world forever.

Jim Butcher: A martial arts enthusiast whose résumé includes a long list of skills rendered obsolete at least two hundred years ago, #1 New York Times bestselling author Jim Butcher turned to writing as a career because anything else probably would have driven him insane. He lives mostly inside his own head so that he can write down the conversation of his imaginary friends, but his head can generally be found in the Rocky Mountains of Colorado. Jim is the author of the Dresden Files, the Codex Alera novels, and the Cinder Spires series, which began with The Aeronaut’s Windlass.

James Marsters is an American actor and musician best known for the role of the vampire Spike in Joss Whedon’s Buffy the Vampire Slayer and Angel series. His other TV credits include Hawaii Five-O and The Super Hero Squad Show. As a narrator, he is the voice of the Dresden Files audiobooks, a supernatural detective series by Jim Butcher.