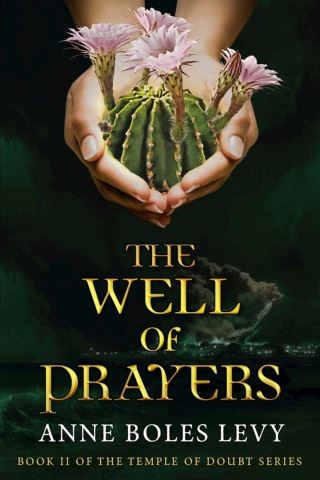 The Well of Prayers

The follow-up to The Temple of Doubt, by the author who Jonathan Maberry called “a powerful new voice in teen fantasy fiction. . . . Expect great things!”

Hadara, now sixteen years old, is still recovering from the night she assisted the Azwans, mighty magi, in destroying a demon that fell from the stars. She has a new job as an apprentice healer and wants to put her past—and her doubts—behind her.

On the planet Kuldor and beyond, it is deemed a sin to doubt the god Nihil’s magic, and heresy to fail to worship him correctly. The Azwans, still on Hadara’s island home, have begun punishing disbelievers with a vengeance.

Hadara can’t shake her own skepticism, though, especially when she suspects that the demon they destroyed isn’t entirely gone. What if bits and pieces are, in fact, floating around inside her and maybe taking root? Since she stood at the altar that fateful night, she’s developed the ability to understand foreign tongues, among other odd talents she never had before. Had she perhaps swallowed some part of the dying demon? She suspects no one can answer that question for her, but she doesn’t trust anyone enough to ask it.

But then a temple guard who she once thought was dead comes back into her life and points her toward new truths and a new sense of purpose: somewhere in the murky jungles surrounding her city, another people beckon her and demand she fulfill the destiny foretold by the falling star.

Anne Boles Levy: Anne Boles Levy currently teaches English to middle schoolers after more than two decades of writing and editing for print, web, and radio. Anne is a graduate of Smith College and studied abroad at University College London. She also has her master’s in journalism from Columbia University. Anne is an amateur silversmith and the absentminded wife to her long-suffering husband, Brett. They run around after two children and a cat in Scottsdale, Arizona.