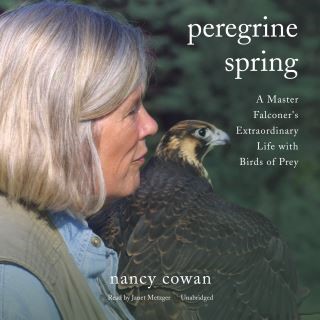 A Master Falconer's Extraordinary Life with Birds of Prey

Peregrine Spring, Nancy Cowan’s memoir of her thirty years living intimately with raptors, gives us a new perspective on the relationship between humans and the natural world. Cowan shares her experiences running a world-famous falconry school, and the lessons she’s learned from her birds. From retrieving her falcon from the local police “lock up,” to a heartbreaking race to save her young peregrine from attack by a wild hawk, Cowan’s life is a constant, ever-changing adventure. Cowan’s birds have immersed her so much into their world that she has found herself courted by a Goshawk and bossed about by a Harris’s Hawk. The book carries her readers along, so they, too, meet hawks and falcons in ways they never imagined possible.

Nancy Cowan is a master falconer, wildlife rescue expert, sled-dog sportswriter and historian, popular speaker, and award-winning writer. After spearheading a years-long campaign to win legalization for falconry in the state of New Hampshire, she and her husband founded the internationally-known New Hampshire School of Falconry. A licensed wildlife rehabilitator, Nancy has worked with a variety of hawk and falcon species which have been injured or orphaned and frequently is consulted by local wildlife rehab centers and New Hampshire Audubon Society on the care and rehabilitation of injured birds. Cowan’s writing has appeared in DogWorld, Yankee Magazine, DOGFANCY, and Down East magazines, as well as club and breed publications.