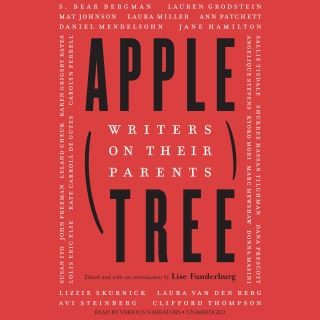 Writers on Their Parents

It happens to us all: we think we’ve settled into an identity, a self, and then out of nowhere and with great force, the traces of our parents appear to us, in us—in mirrors, in gestures, in reaction and reactivity, at weddings and funerals, and in troubled thoughts that crouch in dark corners of our minds.

In this masterful collection of new essays, the apple looks at the tree. Twenty-five writers deftly explore a trait they’ve inherited from a parent, reflecting on how it affects the lives they lead today—how it shifts their relationship to that parent (sometimes posthumously) and to their sense of self.

Apple, Tree’s all-star lineup of writers brings eloquence, integrity, and humor to topics such as arrogance, obsession, psychics, grudges, table manners, luck, and laundry. Contributors include Laura van den Berg, S. Bear Bergman, John Freeman, Jane Hamilton, Mat Johnson, Daniel Mendelsohn, Kyoko Mori, Ann Patchett, and Sallie Tisdale, among others. Together, their pieces form a prismatic meditation on how we make fresh sense of ourselves and our parents when we see the pieces of them that live on in us.

Lise Funderburg is a writer and editor and a lecturer in creative writing at the University of Pennsylvania. Funderburg’s collection of oral histories, Black, White, Other: Biracial Americans Talk about Race and Identity, has become a core text in the study of American multiracial identity in college courses around the world. Her work has appeared in the New York Times, the Washington Post, the Philadelphia Inquirer, National Geographic, Salon, and The Nation.