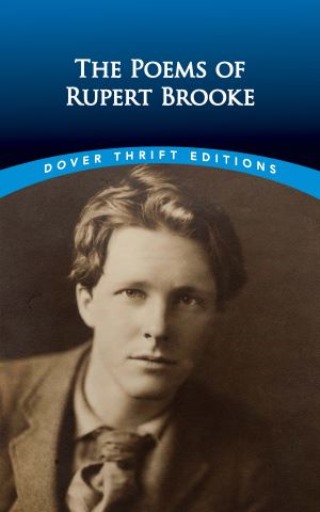 The Poems of Rupert Brooke

The poetry of Rupert Brooke (1887–1915) remains memorable for its charming lyrical quality and the way in which his sonnets perfectly recapture the mood of England at the start of World War I. This volume reprints his complete oeuvre, from the early lyric poems to those written shortly before his premature death: "The Old Vicarage, Grantchester," "Tiare Tahiti," "The Great Lover," "The Dead," "The Soldier," and many others.
Brooke enlisted in the Royal Navy at the outbreak of the war in 1914 and entered the literary scene early the following year, when two of his sonnets ("The Dead" and "The Soldier") appeared in London's Times Literary Supplement.The 27-year-old poet died shortly afterward aboard a ship bound for Gallipoli.  His 1914 and Other Poems was published immediately afterward to wide acclaim. Brooke remains among Britain's best-loved cultural figures, and his works evoke the tranquility of prewar life and the ideals of heroic self-sacrifice.

Rupert Brooke:
A member of the generation of British poets who achieved fame during World War I, Rupert Brooke (1887–1915) burst on the literary scene when two of his war sonnets ("The Dead" and "The Soldier") were published in London's Times Literary Supplement on March 11, 1915. Less than two months later his 1914 and Other Poems was published and went through 24 impressions by June, 1918. After being inducted into the British Royal Naval Volunteer Reserve, Brooke sailed on a Navy ship in February, 1915, heading toward the fighting at Gallipoli in Turkey. He died shortly thereafter, at age 27, on a French hospital ship moored off Skyros in the Aegean Sea from sepsis derived from an infected mosquito bite. Brooke was buried in an olive grove on Skyros.