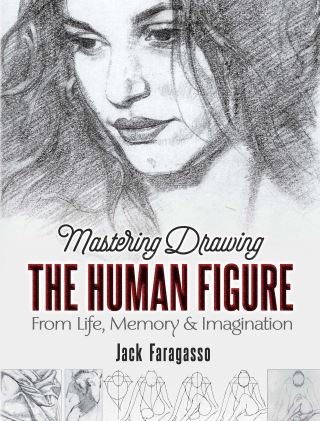 From Life, Memory and Imagination

"This book is for all of those who love to draw the human form. It is for those who have never drawn a line, for those who are students who can draw to a certain degree, and for those professional artists who are proficient in drawing. It is also, of course, for those who teach drawing."
Thus begins the Introduction to this comprehensive handbook for drawing the human figure.  Author Jack Faragasso — an internationally renowned art instructor, fine artist, and illustrator — taught at the Art Students League of New York for five decades. He is also the foremost instructor in the highly regarded Reilly system of drawing and painting, developed by Frank J. Reilly. Both a guide and a reference, Mastering Drawing the Human Figure features hundreds of illustrations with commentary that cover the basic structure of the head and body, light and shade, the proper use of line, conveying action, depicting drapery, and much more.

Jack Faragasso:
Jack Faragasso (b.1929) is a New York institution as a painting instructor. He studied with and worked with Frank J. Reilly for years and is considered the foremost authority on that system of painting. Thousands of students over scores of years have received his instruction at both the Frank J. Reilly School of Art, where he later became the director, and the Art Students League. A prolific illustrator and a fine art painter, he has incorporated these teaching methods into his creative output.