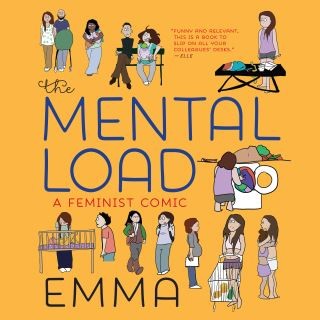 A new voice in comics is incisive, funny, and fiercely feminist.

"The mental load. It's incessant, gnawing, exhausting, and disproportionately falls to women. You know the scene--you're making dinner, calling the plumber/doctor/mechanic, checking homework and answering work emails--at the same time. All the while, you are being peppered with questions by your nearest and dearest 'where are my shoes?, 'do we have any cheese?...'" --Australian Broadcasting Corp on Emma's comic

In her first book of comic strips, Emma reflects on social and feminist issues by means of simple line drawings, dissecting the mental load, ie all that invisible and unpaid organizing, list-making and planning women do to manage their lives, and the lives of their family members. Most of us carry some form of mental load--about our work, household responsibilities, financial obligations and personal life; but what makes up that burden and how it's distributed within households and understood in offices is not always equal or fair. In her strips Emma deals with themes ranging from maternity leave (it is not a vacation!), domestic violence, the clitoris, the violence of the medical world on women during childbirth, and other feminist issues, and she does so in a straightforward way that is both hilarious and deadly serious. If you're not laughing, you're probably crying in recognition. Emma's comics also address the everyday outrages and absurdities of immigrant rights, income equality, and police violence.

Emma has over 300,000 followers on Facebook, her comics have been shared 215,000 times, and have elicited comments from 21,000 internet users. An article about her in the French magazine L'Express drew 1.8 million views--a record since the site was created. And her comic has just been picked up by The Guardian. Many women will recognize themselves in The Mental Load, which is sure to stir a wide ranging, important debate on what it really means to be a woman today.

Emma: EMMA is a 36-year-old computer technician who lives in Paris but who says she learns "all over the place." She podcasts programs for the radio station France Culture, and her comics run in The Guardian. A former member of the collective Stop harcèlement de rue (Stop Street Harassment), she is confident that her feminist beliefs have now made it onto the "information superhighway" for good.